About 200 calves are born each year at Hansen’s Dairy, and Herd Manager Blake Hansen serves as a type of cattle ob-gyn for the expecting cows. While difficulties during labor are uncommon, difficult labors are very hard on the cows and can lead to diminished milking productivity and decreased fertility. For these reasons, Blake keeps a close eye on the cows near the end of their 9-month pregnancy. 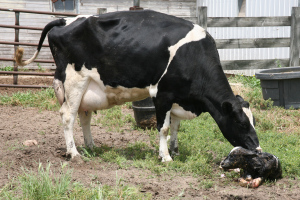 Though each cow is different, Blake will see several indications that a cow is close to labor. In the week before calving, her feed intake decreases and her udder will start to swell. Young heifer’s udders can start swelling as early as 1 month before labor. Several days before labor, the ligaments on the tail head cave in slowly, then drastically when labor is only hours away.

During the first stage of labor, the calf is being forced toward the birth canal and the cervix is beginning to dilate. Because of the dilation, the base of her tail may appear to have a kink in it. At this point, the cow will be moved inside the barn to the maternity pen so she can deliver her calf in a dry, clean space.

Shortly after, the water bag will appear from the vulva. It will resemble a small reddish-brown balloon filled with water, or the bag may burst inside her. When this bag breaks, the cow will feel a release of pressure and she’ll get up to investigate. If she makes no progress for a half-hour after the water bag has appeared or burst, Blake will help the cow with her delivery.

During the second stage of labor the contractions become strong and coordinated. They will come 3 to 5 minutes apart. The cow will often lie on her side begin to push. She will be visibly straining.

Within an hour after the water bag has appeared, two small white hooves should emerge from the vulva while still in the embryotic fluid bag. After a few minutes, the nose will follow, then the shoulders, body and hind legs. The cow will immediately stand and turn to clean the calf with her tongue.

80% of births are unassisted and calves will enter the birth canal correctly, with their front feet first and nose between their knees. But sometimes, the calves may have limbs twisted, be backwards (breech) or too large. 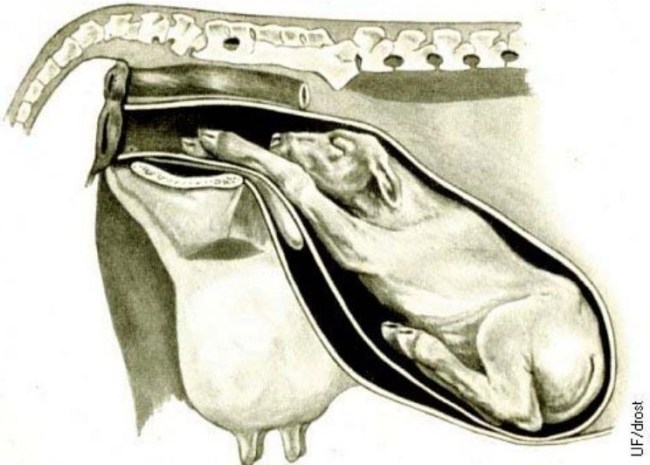 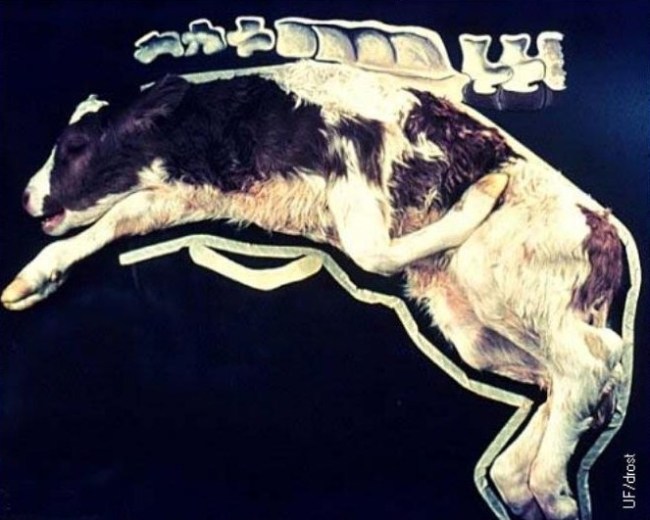 The above picture, from Oregon State University Extension Service (http://ans.oregonstate.edu/sites/ans.oregonstate.edu/files/extension/cattle/CalvingSchool-theCalvingProcess.pdf), shows a calf in the birth canal with its front leg pinned back. A cow with her calf in this position would require some assistance during labor.

This picture, from Oregon State University Extension Service (http://ans.oregonstate.edu/sites/ans.oregonstate.edu/files/extension/cattle/CalvingSchool-theCalvingProcess.pdf), shows a calf in the backwards (breech) position. Blake must quickly deliver the calf before the cow is pushing too much, or it will be hard to reach in and grab the hind legs.

The third and final stage of labor is the passing of the afterbirth. The cow’s uterine contractions will continue in order to expel the remaining fetal membranes. This will last anywhere from 1 to 12 hours.

Some tour participants are lucky enough to witness a calf being born. It’s wonderful to see the miracle of life before your eyes!