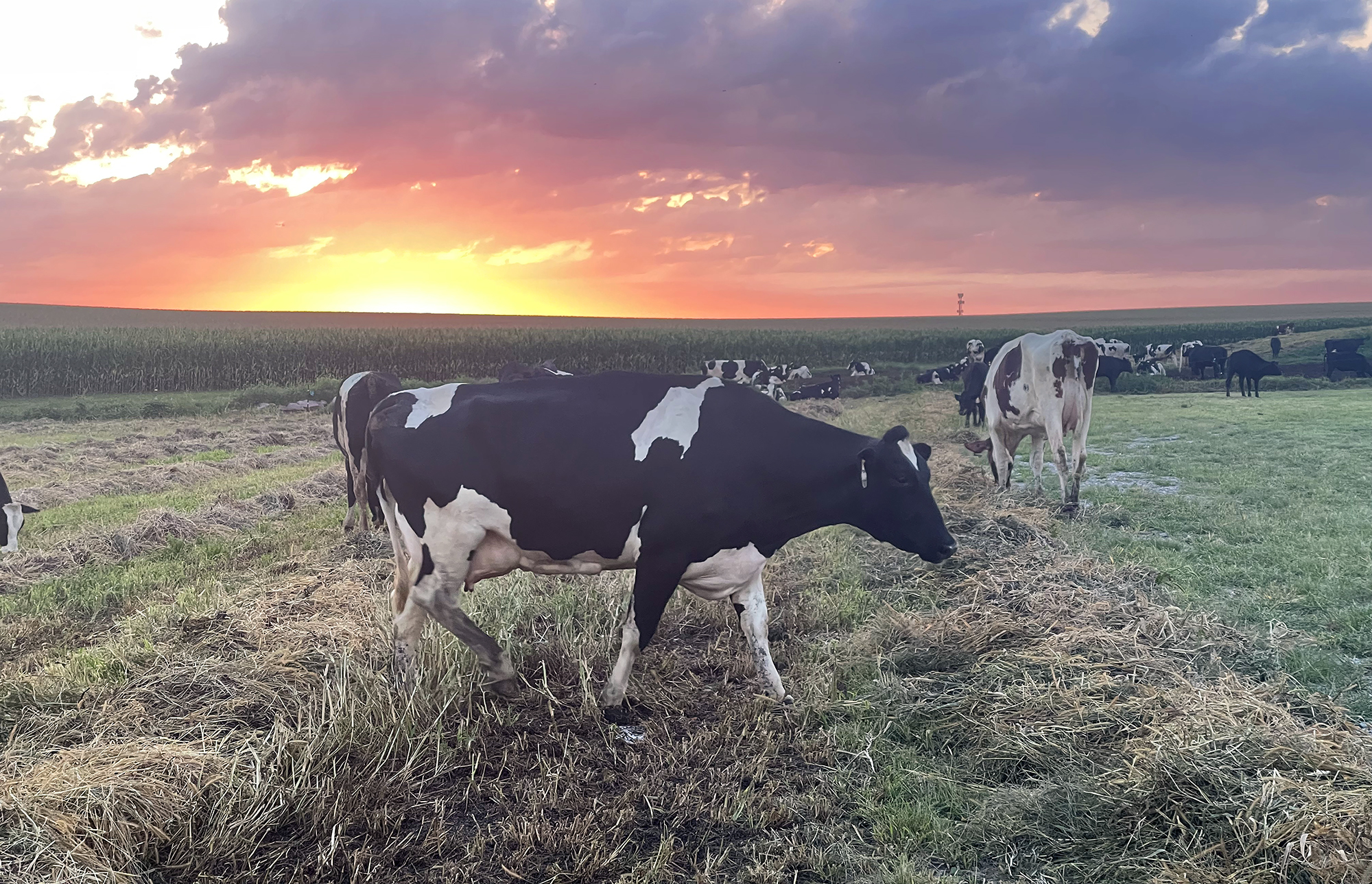 A beautiful sunrise belies the udder chaos of more than 50 cows breaching the fence.

We can plan until the cows come home, but eventually they’ll breach the fence. We learned this again last week when a large section of our electric fence failed and we were left waiting for …  you guessed it … the cows to come home. 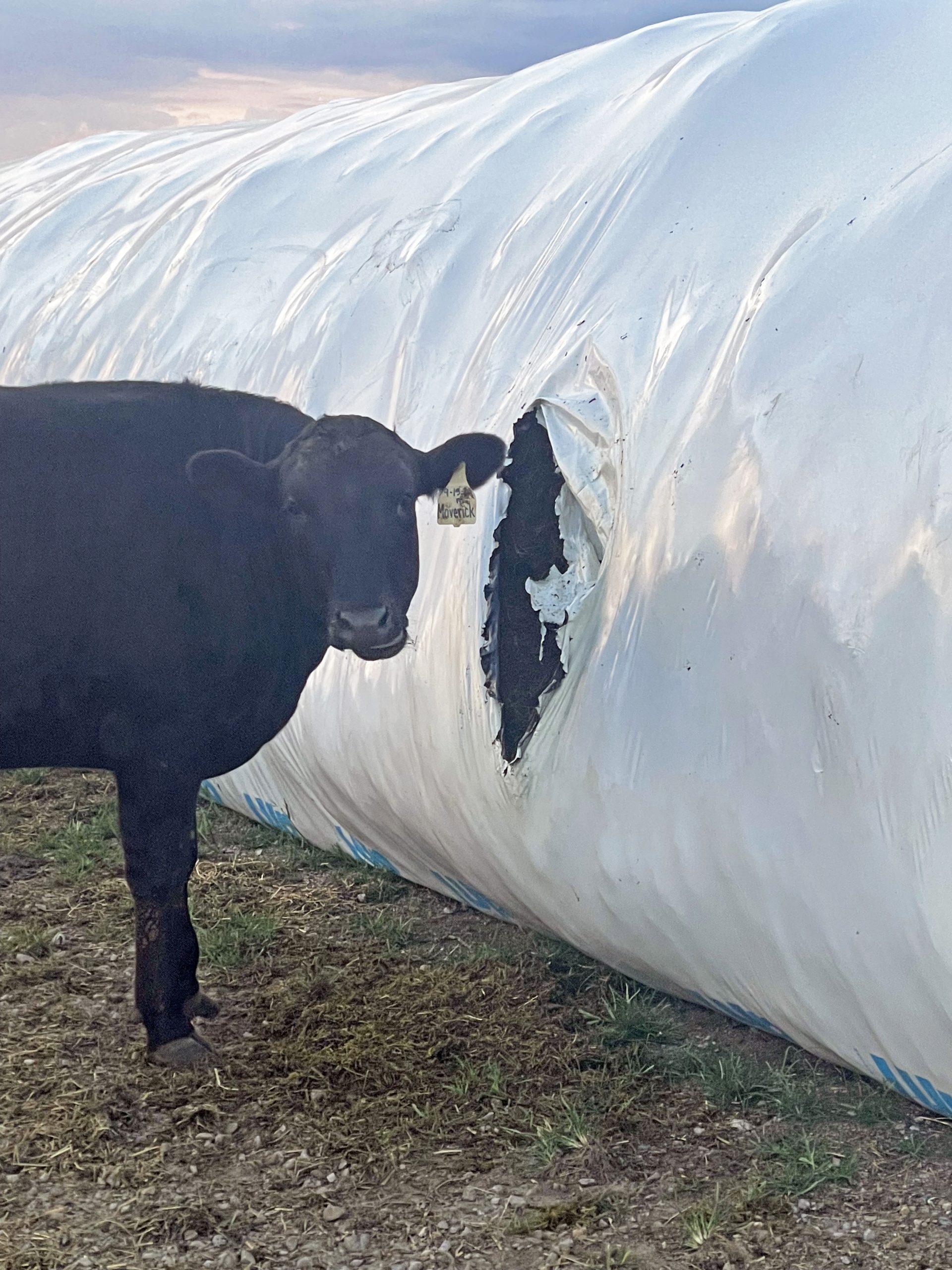 Maverick got the munchies after a night of partying outside a downed fence. Here he grabs a snack from a once tightly sealed silage storage bag.

Around 50 cows left their lots in the wee hours last Thursday, exploring areas of the farm sensibly off-limits to the herd. Like the front lawn. And the silage storage area. And the manure pit.

We’re not sure exactly when or why the fence went down. But a midnight text message from a neighbor that went unseen until morning indicates the cows were painting the town red for nearly three hours before Herd Manager Blake Hansen discovered something was amiss at the O.K. corral.

“They’ve gotten out before, but normally it’s just one small group,” he said. “It’s been at least 10 years since we had this many get out. Every night before bed I check to make sure the wire is hot. It’s just one of those things. We don’t know for sure what happened.”

It was already going to be a busy morning. The milk tester was coming that day. Each milking cow’s milk volume and components are tested every month, a process that adds a little extra time to the 4 a.m. milking.

Blake was setting up the milking parlor when he got a call from fellow milker Jadyn, who’d just arrived.

“She told me there were a couple cows walking around in the driveway. I know where there’s two, there’s more,” he said. Heading outside, there was “no hot wire to be found. Every lot was open except the dry cow lot.”

The problem with an escape this size is the mixing of cows from different groups. Most of the cows on the lam were young heifers. Some were pregnant. Some were milking cows. Milking cows need milked every 12 hours. That’s hard to do when they’ve run amok. 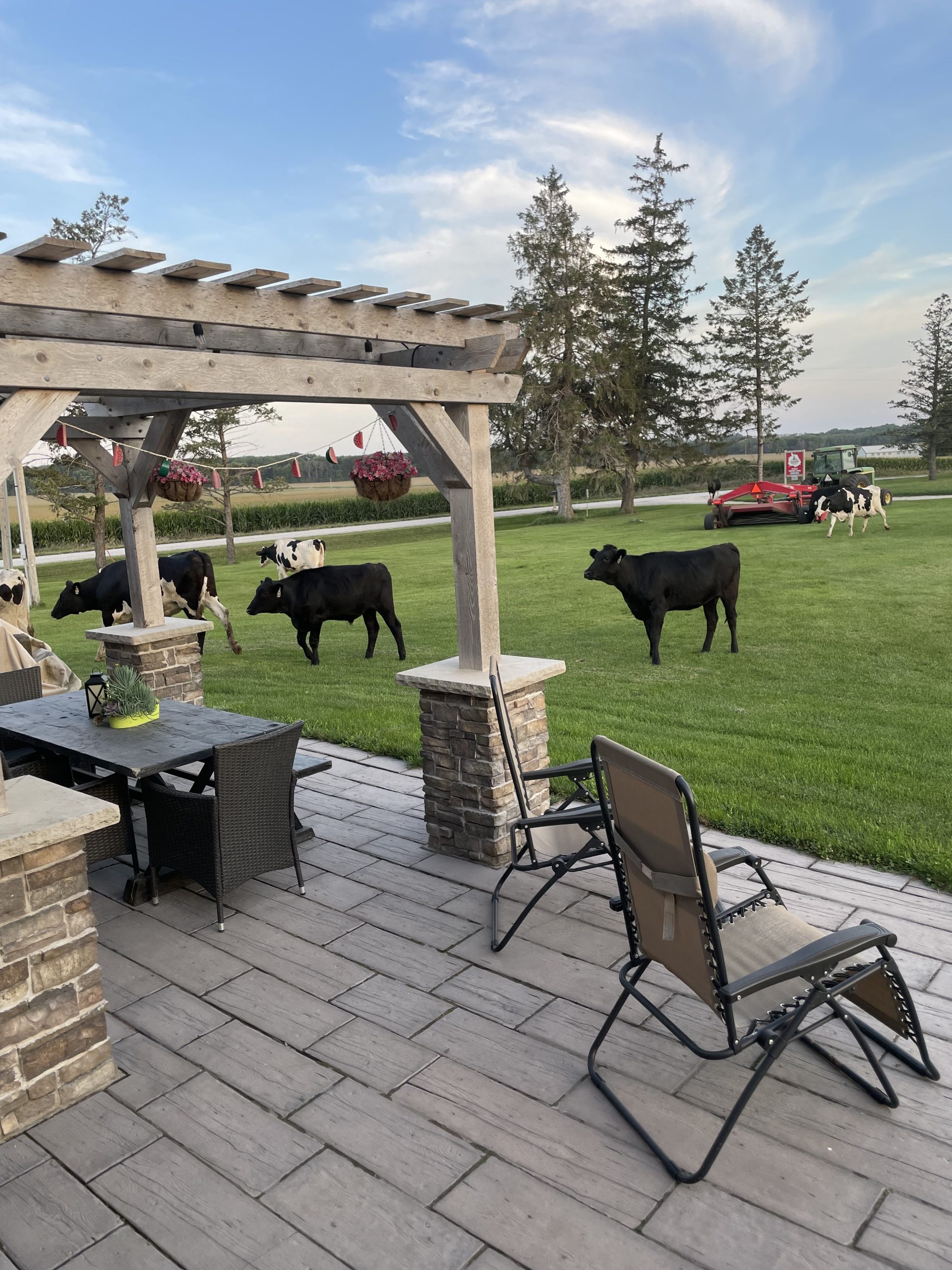 Several cows made their way to the front lawn of Farmer Blake’s house. Maybe they were planning a picnic?

And run amok, they did. Several helped themselves to a midnight snack, tearing holes in freshly filled silage storage bags. Some gave critique to the patio design in the front yard of Blake’s family home, leaving behind deep hoof dents and piles of smelly souvenirs.

Three of them — Danza, Lansing and Lansky — took a stinky swim in the manure pit, from which they emerged unrecognizable and offensive even to their herdmates.

“Danza, she was not red and white anymore,” Blake joked. “She comes into the barn and the cows were smelling her like, ‘Where have you been?’”

As Blake worked to repair the fence, his brother, Field Manager Blair, helped herd the ladies on the loose back to their lots and barns. Blake’s wife Jordan and their kids Reese and Beckett helped moooove cows off the lawn and back into the barn. By then, it was around 8:30 a.m. Morning milking is usually finished by 6 a.m. Some of the milking cows, like dirty Danza, still needed to be milked. Her udder gave her away.

“She was covered in manure and spraying milk everywhere,” Jordan said.

While fixing the fence, Blake noticed that despite no barriers, the older and wiser cows stayed put. Just three of the 70 cows in that group had strayed. The younger cows, their stomachs eventually empty and their udders uncomfortably full, began to realize the grass is greener on the other side until you’re missing the comforts of home.

“They all basically herded themselves in once they saw I had a gate down for them. When it comes to crunch time they want to come in because they get hungry or want to get milked,” Blake said. 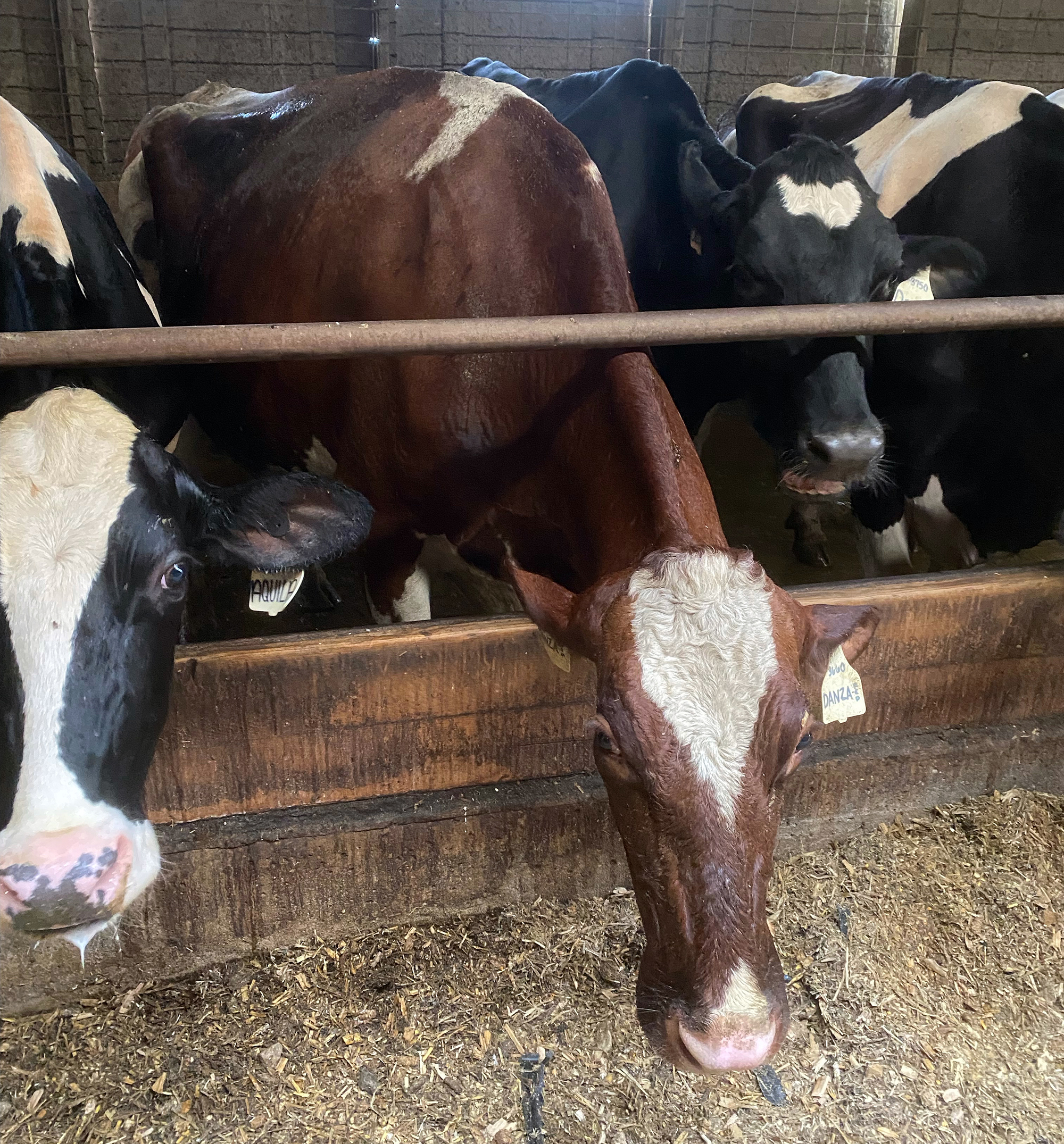 Danza is once again a red and white Holstein after a dirty dip in the manure pit.

It was after 9 a.m. before all of the cows were back behind fences or in barns. It took still more time to sort them back into their groups. Once back in the barn, stinky trio Danza, Lansing and Lansky rinsed themselves off under the sprinklers, which are usually meant just for keeping the cows cool, not taking a shower.

While the morning’s mayhem set the day’s schedule back a bit, dairy farmers are well versed in staying calm and expecting the unexpected.

“You just have to realize it’s going to happen eventually. If you get worked up, the cows get worked up and they don’t cooperate,” Blake said.

Here’s a video we put together from the morning’s shenanigans. Hope you have as much fun as the cows did!