From the News Desk to the ‘Moos Desk’ 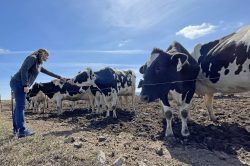 Meta learns how to interact with the cows while also respecting the electric fence. Just moment earlier she learned the power of the fence the hard way.

“The most difficult thing is the decision to act, the rest is merely tenacity.” Gutsy pilot Amelia Earhart, a pioneer of women in aviation, said that about flying. It resonates with me most days, but particularly so in the last month as I became Hansen Dairy’s new Marketing Manager after leaving my longtime post as Editor at the Waterloo Courier.

What I’ve come to realize is the brief fear of big decisions doesn’t hold a candle to the joy of discovering new things.

In the past few weeks I’ve spent time in the Hansen farm’s milking parlor with Herd Manager Blake and his team. I’ve learned how milk is processed in their on-site creamery and I’ve done a ride-along with Distribution Manager Brent, delivering the farm’s products to grocery stores, restaurants, coffee shops, daycares, nursing homes and the Northeast Iowa Food Bank. I’ve bottle-fed a calf and petted the farm’s kangaroo mascots. Have mercy, they’re adorable!

I even bought my first pair of mud boots. There wasn’t much call for those boots in the Courier newsroom, where I spent 25 years as a reporter and editor. I officially closed my journalist notebook the first week of March to join the Hansen Dairy team, trading the news desk for the “moos desk.” (Apologies, but no storyteller worth her salt can resist a good pun.)

Among my duties will be writing newsletter content and blogs, and managing Hansen Dairy’s social media accounts. During tour season, I’ll be one of the farm’s tour guides, providing fun, educational experiences on the farm-to-table process. I’m excited to get those boots dirty! 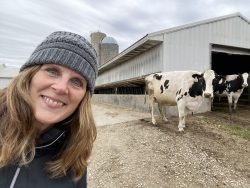 Meta takes a selfie with Applelicious, who gives a wary side-eye to the newcomer on the farm.

It’s uncharted territory for me. I grew up a city kid in Waterloo with no exposure to agriculture, farm life or where our food comes from. It’s been an adjustment, but there’s proof, big and small, that I’ve joined an exceptional crew at Hansen’s. On my first real tour of the farm, expectant Holstein Applelicious and I greeted each other with cautious curiosity, both of us masters of the wary side-eye. We decided neither of us is a threat, and she seemed to forgive my newbie thoughts otherwise.

I also took it as a sign that I’d landed in the right spot when, at my first marketing meeting with the crew of Hansen’s two retail stores, I noticed four of the eight of us are left-handed, including yours truly. Just 10 percent of people worldwide are lefties, but on that day we held 50 percent of the room! Anecdotally, that percentage of lefties in a room is a sure sign that everything is right.

But how did a city girl like me land an ag marketing gig? At its core, marketing is about good messaging and storytelling. That’s also the backbone of my previous career. It also helps to have friends in farm places (sing it with me).

Jordan Hansen, the farm’s bookkeeper, graphic designer, marketer and all-around Dairy Queen, is a longtime friend. We met at the Courier nearly 20 years ago. She worked on the copy desk and I was on the news desk. Our friendship continued long and strong after her departure from the news business.

It was the highest honor when, in May 2005, the farm named a newborn calf after me. To the uninitiated, naming cows is a pretty big deal on a dairy farm. (We’ll cover that in a future blog post.) I felt like a proud auntie! Meta grew up to be a prolific producer, generating 191,000 pounds of milk in her lifetime — an outstanding measure! Her milk also had a high butterfat percentage, bragging rights for any Holstein.

The YouTube video of Meta the cow giving birth has amassed more than 10 million views.

Over the years, Meta gave birth to nine calves, one of which brought her internet fame. A video of Meta delivering her seventh calf amassed 10.7 million views on YouTube. She clearly was destined to be “legendairy,” and she didn’t disappoint. She died Nov. 5, 2015, at 10 1/2 years old. The Hansens gifted me her ear tag, and it remains a treasured keepsake. I’d like to think the sturdy, tenacious Holstein Meta paved a path for Human Meta on the farm. She certainly left big hooves to fill, and I hope to make her proud.

Today, Meta the cow remains a fond memory, and Jordan and I remain close friends. We belong to a core group of women athletes who meet every Saturday for running and coffee. Years ago, declaring ourselves graceful, tough and brave, we named our group The Princess Warriors. Those traits were key as we trained for multiple full- and half-marathons together over the years.

The group’s moniker is apt for running and life in general, an exclamation point for the courage and mettle it takes to put on the shoes — or mud boots — and hit the ground running in all challenging endeavors. I’m excited for the challenges ahead in my new role and the opportunity to promote Hansen’s mission of “educating visitors about life on a working family dairy farm/creamery and the importance of agriculture and local food systems.”

I aspire to be, like Jordan, a Princess Warrior and a Dairy Queen. And I hope Holstein Meta’s indomitable, “legendairy” spirit approves.