There is a global debate about raw milk happening. In several countries, including the U.S., there are serious conversations taking place about whether people should drink, and especially whether they should be able to purchase, raw milk. The point of this post is not to advocate for or against either side. The purpose is to provide you with information and to let you know our policies and why we have them. 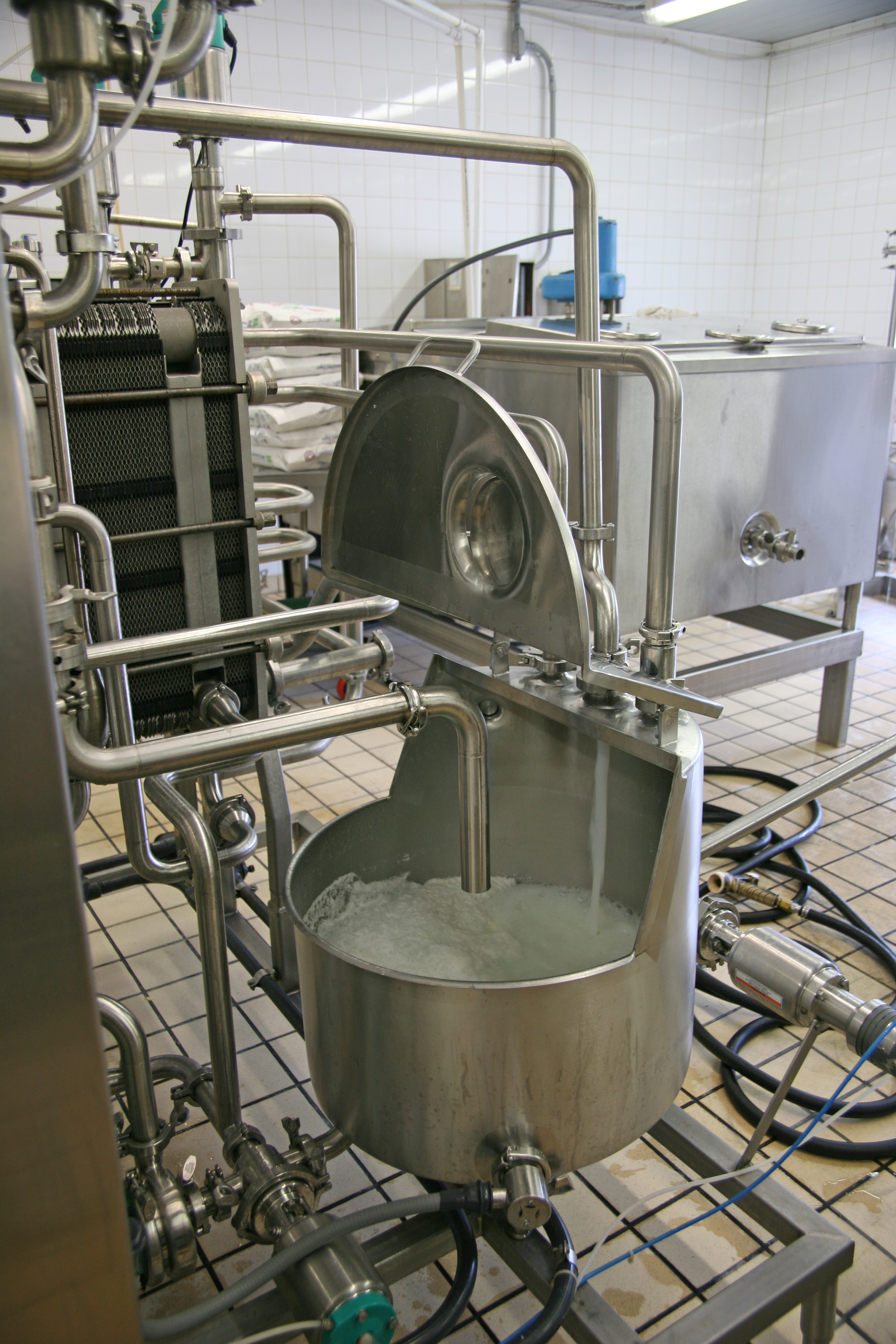 Here is raw milk going through the pasteurizer in the Hansen creamery. Our milk is heated to a temperature of at least 161 degrees for 15 seconds.

First, a few definitions. Pasteurization involves heating milk (or any food or liquid) to a certain temperature and then immediately cooling it to slow the growth of microbes and bacteria. This keeps the product from going bad as quickly as it might otherwise. High temperature, short time (HTST) pasteurization, which is what we use at Hansen’s, kills 99.999% of viable micro-organisms in the milk (like yeasts, molds, bacteria, and pathogens). Just a reminder – although we DO pasteurize our milk, we do not homogenize it (shake that jug, folks!).

When people talk about “raw milk” they mean milk that has not been pasteurized or homogenized. Until the 1890s, everyone drank raw milk because pasteurization wasn’t common practice yet. Pasteurization became widely practiced after the development of germ theory and the discovery of bacteria. It was thought that some diseases common in cows were transmitted to humans in raw milk. Since not every farmer’s milk could be tested, it was considered safer to pasteurize all of the milk.

Some people believe that pasteurization damages nutrients in the milk (such as calcium) and kills “good” bacteria that are beneficial to the digestive tract and our immune systems. The argument for raw milk is that these good bacteria help maintain a healthy balance in our bodies and make our immune systems stronger.

Proponents of raw milk believe that if it has been “produced under sanitary and healthy conditions” it is safe and even healthy to drink (Campaign for Real Milk). An important point is that even people who advocate for raw milk believe that for it to be considered safe, the milk must come from cows that are “healthy (tested free of TB and undulant fever) and do not have any infections (such as mastitis).” Raw milk should come from cows fed grass, hay, silage, and only a little bit of grain; the cows should be milked in a clean area and the milk should be refrigerated right away.

There are three primary sources of contaminants in milk: from within the cow’s udder, from the outside of the udder, and from handling and storage equipment. Experts agree that if a cow is sick, there is bacteria in her milk. But in a healthy cow, the milk in her udder is virtually sterile. Even in healthy cows, some bacteria are present in different parts of the teats, and that bacteria can enter the milk. But it’s usually in very low levels in a healthy cow.

Why the debate? Well, you can see that raw milk has to come from pretty special cows and special farms. Most large scale, commercial dairy operations are not going to have the kind of conditions that were just described. Only 28 U.S. states allow the sale of raw milk. The Centers for Disease Control and Prevention and the Food and Drug Administration recommend not consuming raw milk. The CDC notes that 79% of disease outbreaks associated with dairy between 1998 and 2011 were due to raw milk or cheese.

Where do we stand at Hansen’s Farm Fresh Dairy? Well, first off, our cows are healthy and well-cared for. Our facilities are very clean. But we do not sell raw milk and we do not plan to sell raw milk. Most dairy farmers don’t want to put themselves at risk for liability. It’s also bad for the dairy industry as a whole, because if there was an outbreak of sick people, the media fallout would damage an industry that already has a shaky public perception. The problem is that it depends on the consumer to store and drink it safely. People can buy raw meat or eggs because the consumer can cook those foods properly to kill any bacteria. With raw milk, we don’t have safeguard. Unpredictable, unpreventable, uncontrollable things happen during milking time that can affect the bacteria content in the milk. For example: if the cow kicks off her machine, it becomes a vacuum cleaner for whatever is in the area. That’s why we drink pasteurized milk.

At Hansen’s Farm Fresh Dairy, we provide our customers with a high-quality product. Our cows are treated well and not given any hormones or antibiotics in their feed. We treat the milk as minimally as possible – very quick pasteurization and no homogenization – because we want it to be fresh, delicious, and healthy.